If five uniformed police officers, three FBI agents, and several deputy sheriffs all walked into the offices of the Walter & Elise Haas Fund, you might expect us to fear the worst. These are frightening times, and so many law enforcement representatives converging at a foundation that gives grants to faith-based organizations could seem ominous. 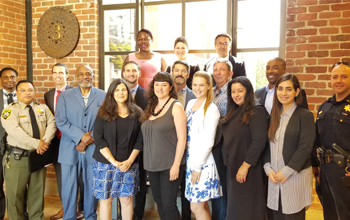 In this case, however, we welcomed their presence in our conference room, as members of a planning committee addressing the increasing threat of violence many communities of faith face.

In partnership with our grantee, the San Francisco Interfaith Council, we convened a series of three meetings with representatives of law enforcement agencies and of the Christian, Jewish, and Muslim communities. Together, this planning committee worked to respond to these growing security concerns with education and collaboration.

Congregations of all faiths are worried. In June 2015, nine congregants were killed during Bible study at the Emanuel African Methodist Episcopal Church in North Carolina. In October 2018, 11 people were killed and 7 injured during Shabbat services at the Tree of Life synagogue in Pennsylvania. And in March 2019, 51 people were killed and 49 injured in consecutive shootings at two mosques in Christchurch, New Zealand. One month later, in April 2019, one woman was killed and three injured at a shooting at a synagogue in Poway, California during Shabbat services.

And, just as I was writing this blog post, two people were killed outside a synagogue in Halle, Germany. Only locked doors and armed security personnel kept this tragedy from becoming the latest in a series of high-fatality massacres of people of faith. These events are not isolated, but part of a pattern we all must rise up to stop.

What can be done to keep worshipers and religious communities safe? How can synagogues, churches, and mosques remain open and welcoming to all while also maintaining adequate security? Our planning committee grappled with these questions — with work culminating in a training attended by 280 clergy and faith leaders at St. Mary’s Cathedral in San Francisco. Mayor Breed addressed the participants, who learned from experts in public health, cyber security, and law enforcement. Leaders from the Jewish Community Center, the Islamic Society of SF, and Grace Cathedral opened the day with real-life examples and concerns. The day ended with faith representatives sitting in small groups at tables with police officers, establishing trust and learning from one another.  The San Francisco Interfaith Council has compiled useful resources for congregations.

The Walter & Elise Haas Fund supports efforts to ensure the resiliency and security of the people of San Francisco and Alameda counties. Residents here should be able to live healthy and successful lives free from bigotry and intolerance. We support all people in safely practicing their faith through efforts to build interfaith understanding and to help houses of worship stay open, accessible, and safe.